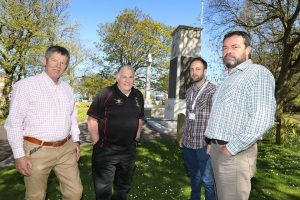 Northumberland County Council has become one of the first local authorities in the country to offer a dedicated service to help the armed forces community.
The council now employs two armed forces outreach workers who can help with a broad range of issues, including; housing, education and training, employment, mental health and social welfare. The roles are funded through The Gateshead Housing Company.
Northumberland is part of the Armed Forces Outreach Service partnership which covers County Durham, Tyneside and Northumberland. The service is unique in employing outreach workers who work solely with the armed forces community, and is the only scheme of its kind in the country.
Jonny Harrison and Paul Havelock, both ex- Royal Navy, have been dealing with high volumes of cases since joining the council six months ago. They have been working with serving officers and veteran staff on issues including Post Traumatic Stress Disorder (PTSD), homelessness and financial issues.
Once a referral is made, with many coming from the council’s housing team, an initial assessment call is made to establish what the individual’s needs are. Working closely with external partners such as SSAFA – the Armed Forces charity; the Royal British Legion and the Regular Forces Employment Agency they help them get the advice and support they need to start a new life outside of the armed forces.
Jonny said: “Coming out of the armed forces can be quite daunting, you come from being part of something big to feeling isolated and overwhelmed. Many veterans have not had to deal with things like managing their own money and can struggle with finding employment and housing.
“We can help to put them on the right path to settling back into civilian life. Some of the cases we have dealt with include helping an elderly veteran who had mobility issues. We helped him into a more suitable home and, through the Royal British Legion, we were able to get him a mobility scooter so he regained some of his independence.”
Paul added: “As ex-servicemen ourselves we know some of the issues that people can face. When I left the Navy finding somewhere to live was difficult and not knowing where I could go for advice made it more difficult.
“Working with our partners we can now help from the moment they decide they are going to leave the armed forces and hopefully make the process more hassle-free.”
Cllr Gordon Castle and Cllr Dave Ledger, armed forces champions, for the council said they were delighted Northumberland is now able to offer this dedicated service and would urge anyone who is about to leave the armed forces or who is a veteran and needs some help and advice to get in touch.
Mick Downworth, regional coordinator for the Armed Forces Outreach Service, said: “Jonny and Paul are doing excellent work with the forces community and have received fantastic support from Northumberland Council.
Armed Forces champions Cllr Gordon Castle and Cllr Dave Ledger are pictured with Paul Havelock and Jonny Harrison