Home » Councillor steps out for charity

Councillor steps out for charity 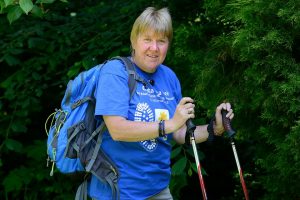 A Cramlington Town Councillor is donating her members expenses to a charity close to her heart.
Pat Heard, who represents the West Ward, became involved with Marie Curie following the deaths of her husband and father and the £500 from the council has kick-started her target of £4000.
The sudden death of her husband George from sepsis in 2012 and then her father John from cancer in 2015 spurred Pat on to complete a series of fund-raising treks in their honour.
Pat has already raised an impressive £20,000 for the charity with three previous treks in the Canadian Rockies, the Grand Canyon and Costa Rica.
That £20,000 was enough to fund the Newcastle Marie Curie Hospice for three days.
After completing the three annual treks Pat was contemplating hanging up her boots but decided she had one more trek within her so in 2019 she is heading off to South Africa.
She always pays for her travel and accommodation costs herself meaning every penny raised will go directly to Marie Curie. She is now planning a series of fund-raising events so watch this space and we will keep you informed of what’s happening.