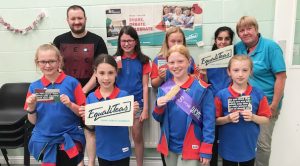 The state of equal rights in Britain was discussed and debated and the progress that has been made over the last 100 years was celebrated.

Councillors Barry Flux and Pat Heard (pictured) saw that the discussion reflected the fact that even in today’s society, at home and abroad, women, people of ethnicity, the LGBTQ community and the impoverished are not treated equally.

As part of their recognition of the centenary of some women gaining the right to vote, the girls will be travelling to London to visit the palace of Westminster, the House of Lords and the House of Commons. They will also view the statue of Millicent Fawcett in Parliament Square. The sculpture is the first of a woman in the square where she joins eleven male statues.