Home » Fire and Rescue Service team up with Mountain Rescue

Fire and Rescue Service team up with Mountain Rescue 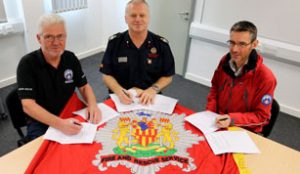 The signing of this contract establishes shared access to resources and assistance between the authorities, which can be provided in the event of an emergency incident.

NFRS will benefit from the expertise and specialist equipment from the Mountain Rescue Teams in response to incidents such as water related incidents, including flooding, special service calls involving cliffs and embankments, road traffic collisions in difficult to access locations including during extreme weather events, wildfires and rural incidents as well as missing persons.

Through this agreement, NFRS have gained access to a web-based shared operational system, which allows mobilisation requests from other calling authorities and subsequent details response can be viewed in real time.

In addition to shared resources and assistance with NFRS, the Mountain Rescue Teams will have 24/7 access to both Pegswood and Rothbury fire stations  in order to respond to incidents, undertake regular vehicle and equipment checks to maintain an operational response, and to train to maintain competency. They have also been given designated storage facilities at the fire stations for equipment and vehicles.

Northumberland National Park Mountain Rescue Team Leader, Iain Nixon, said: “We’re excited to be continuing our work with NFRS in this partnership, and look forward to the sharing our expertise and resources with each other when responding to emergency incidents in Northumberland.”