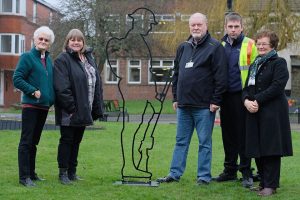 Cramlington Town Council has purchased their own “Tommy”.
Tommy is a symbol of remembrance created by the charity Remembered, as part of their project “There But Not There”
Members of a World War I working party set up to co-ordinate Cramlington’s Remembrance commemorations are seen with with sculpture in the village square.
The “Tommy” silhouettes will be used throughout 2018, marking the centenary of the end of the First World War and also to inspire communities organising their own remembrance events.
So far there are plans in Cramlington for a poppy themed planting scheme including a poppy roundabout and a Royal British Legion commemoration run as well as events on Remembrance Sunday, November 11th.